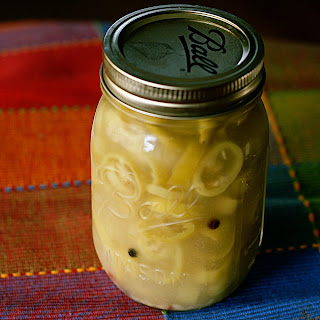 Every year banana peppers always seem to be our fastest growing and most proliferate pepper plant. We have already picked a ton this year and I thought this would be a perfect opportunity to start canning (well technically jarring). Pickled banana peppers from the jar make a perfect sandwich or salad topping. I drool just thinking about biting into a big italian salad with pepperoni, Italian dressing and a banana pepper with some bite. Yum!

The processing of canning these peppers was so much easier than I had expected. It is really just a simple brine poured over banana peppers. Then you put the lid on the jar and boil for 10 minutes. I didn't have any fancy canning tongs to pull the hot jars out of the boiling water so I improvised. I used my large pot with the pasta strainer insert (like this). So when ten minutes was up I just pulled out the strainer and set it on a towel on the counter. When the jar was cool enough I put it in the fridge and just 2 days later I had perfect peppers :)

Pickled Banana Peppers
(I used these 2 sites for inspiration, The Yummy Banana and Clean Eating Club)
Since this was my first time canning I started small and only used enough to fill one jar.

Directions
The first thing you need to do is sterilize your jar. A hot water dishwashing cycle should work with a hot dry cycle. After removing from the dishwasher be sure to thouroughly dry the jar, lid and ring.

In a saucepan bring the vinegar, water, salt, peppercorns and mustard seed to a boil. Then remove from heat. In a large stock pot bring plain water to a boil.

While the brine is coming to a boil, slice the peppers into rings. Cut on of the garlic cloves into fourths and layer the peppers and garlic in a jar. Put the second garlic glove on top of the peppers. 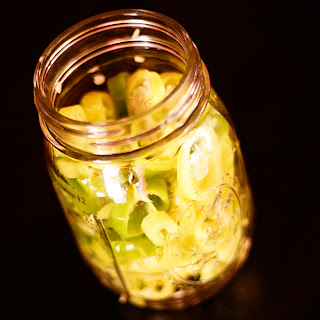 Pour the bring over the peppers, leaving 1/2 inch space at the top of the jar. Place the lid on top of the jar making sure that seal is tight, then screw on the ring. Place the jar in the large stock pot of boiling water and boil for 10 minutes. Carefully remove the hot jar from the boiling water. After cooling for a few minutes check to make sure the jar sealed (If it is not sealed the middle of the lid will pop up and down). If it didn't seal just be sure to always keep it refrigerated. If it did seal you can keep in the pantry until the seal is broken, but I put mine right in the fridge. 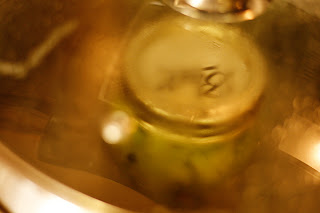 After letting the peppers sit for 2 days they are ready to eat! They can be served on top of sandwiches, in salads, in calzones, you name it!
Posted by Jessica at 9:40 AM

Labels: Canning, So You Grew a Garden...