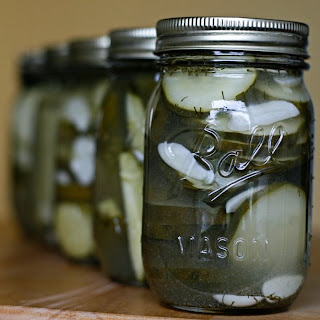 Anyone that has grown a garden with cucumbers will tell you that at one point in the summer they will have SO MANY cucumbers they will start leaving them on neighbors doorsteps in the middle of the night, just to get them out of the house. It's only July and I am tempted! We planted a lot of cucumber plants (I thought we planted 5 or 6 but I counted last time I was out there and it's actually 7) this year and all but 2 of them are thriving. The funny part is the Jesse doesn't even like raw cucumbers. But, he does like pickles! So I knew from the beginning that I would be making my own this year. And man oh man am I glad I did! They are so good, crisp and delicious and they will only get better with time. 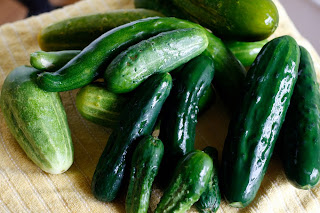 Dill Pickles
(I didn't use one specific recipe, instead I read about 100 different kinds and pulled pieces from each one to come up with what I thought was best)

Supplies:
5-6 Pint size jars with lids and rings
1 medium saucepan
1 large stock pot (Like with the banana peppers I used my pasta pot)

Ingredients:
Lots of cucumbers!
5 cups water
2 1/2 cups white vinegar
1 tbsp salt
1 tsp dry ground mustard
1 tbsp whole pepper corns
10-12 cloves of garlic (I put 2 cloves in each jar which is pretty garlicky, if you are not big on garlic only use one)
Dill - I wanted to use fresh but my grocery store was out so I found this freeze dried dill (right by the garlic) it's supposed to be as close to fresh as you can get. I used about 1 tsp per jar and I am very happy with the taste. 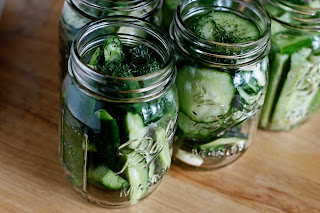 Start by sterilizing your jars. (You can read about that in my banana pepper post) While waiting for my jars to come out of the dishwasher I filled 3 big bowls with ice water and a tsp of salt and let the cucumbers soak for at least an hour (hence the shiny cucumbers in the picture). In my research I found that this helps to make the pickles crisp.

In a medium sauce pan bring the water, vinegar, salt, ground mustard, and whole peppercorns to a boil. (In the meantime fill your large stock pot with water and get the water boiling) After bringing it to boil remove from heat and set aside.

While the brine is cooking cut your cucumbers (I made 3 jars of "chips" and 2 jars of spears). Then cut the garlic cloves into slices.

Fill the jars by alternating garlic, dill and cucumbers. Finish with a slice of garlic and some dill. Then pour the brine into each jar leaving 1/2 inch space at the top.

Put the lids on the jars, making sure the seal is good, then put the rings on. Then carefully place each jar in the boiling water and let boil for 10 minutes. After 10 minutes carefully remove the jars from the water and let cool on a rack or towel.

Let the pickles rest for at least 24 hours and then, finally, you can enjoy them! Of course they will get better with time so if you can make yourself wait for 3 or 4 days..... 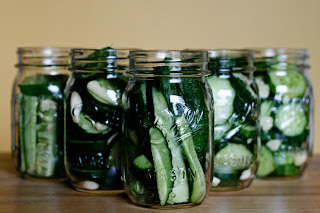 Labels: Canning, So You Grew a Garden..., Vegetable