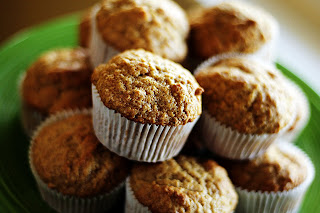 This week I decided to try a healthier variety of muffin (a weekend full of cookouts and eating out will do that to a girl). I used a few different recipes as inspiration to come up with this super easy muffin. It really made the house smell fantastic and I'm hoping I'll feel less guilty if I decide to grab 2 one morning instead of 1 ;)

Line muffin tin with liners and preheat the oven to 400 degrees.

In a medium bowl sift together the flour, baking powder, salt, nutmeg and cinnamon. Next add the sugar to the flour mixture and blend. In another medium bowl (or your standing mixer) blend the milk, applesauce and egg. Add the dry ingredients to the wet ingredients and mix just until blended.

Scoop the batter into a muffin tin (about 1/3 cup into each cup). Bake at 400 degrees for 20-22 minutes or until a toothpick inserted into the middle comes out clean.
Posted by Jessica at 8:59 PM 1 comment: 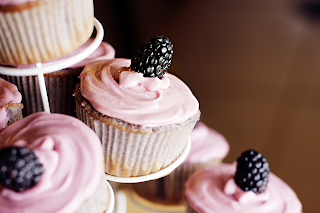 As soon as I saw a picture of these cupcakes on Annie's blog a few weeks ago I knew that I would have to try them. I'm not usually a fruit dessert person but for some reason this combination sounded really good to me, plus the recipe calls for the berries to be pureed so there was no risk of me biting into a big chunk of fruit.

I really enjoyed these cupcakes. The flavor was excellent and they were really moist. However, when I first took them out of the oven I was worried because the color was sort of a non-appealing gray and the tops just looked funny (I'm pretty sure I over-mixed the batter). Then came the icing.... That started out as a major disaster. My plan was to use my star tip but the icing was so incredible runny that it just ran all over the side of the cupcake. After adding a LOT more confectioners it was better but in the end I just ran a spatula over the tops and swirled them because they were looking sad and droopy. So beware, these are not the right cupcakes for a star tip swirl on the top. Despite all of that these were a big hit and I would definitely consider making them again.

I doubled this recipe but below I am posting the original recipe. I also added the beans, from the vanilla pod used to make my vanilla sugar, to the batter. Other than that I made the recipe exactly as stated. 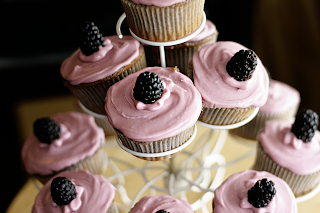 *If you do not have vanilla sugar, you can substitute an equal amount of regular sugar and 1 tsp. vanilla extract, added to the batter after the eggs.

For the frosting:
8 oz. cream cheese, at room temperature
3 cups powdered sugar, sifted (I doubled the recipe but in the end I used closer to 8 cups of powdered sugar!!)
5 tbsp. blackberry puree

Directions:
To make the cupcakes, preheat the oven to 350 degrees F. Line a cupcake pan with paper liners. In a small mixing bowl, stir together the flour, baking powder and salt. Set aside. In the bowl of an electric mixer, cream together the butter and sugars on medium-high speed until light and fluffy. Add in the eggs one at a time, scraping down the bowl between additions. (This is when I added the vanilla beans)

Divide the batter evenly between the prepared paper liners. Bake 12-15 minutes or until a toothpick inserted in the center comes out clean. Allow to cool in the pan 10-15 minutes. Transfer to a wire rack and allow to cool completely.

To make the frosting, combine the cream cheese, powdered sugar and blackberry puree in the bowl of a stand mixer fitted with the paddle attachment. Mix on medium speed until smooth and well blended. Frost cooled cupcakes as desired and garnish with fresh blackberries (optional).
Posted by Jessica at 11:06 AM 3 comments: 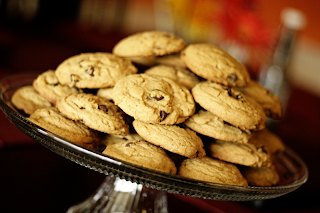 If I use half unbleached all-purpose and half unbleached whole wheat flour does that make the cookies half wheat's? Well, I don't really know the answer to that but I do know that it makes these cookies delicious! This is probably one of the best chocolate chip cookie recipes I have ever made. The cookies are slightly crisp on the outside, chewy and tender on the inside and they have great depth in their flavor. On top of all of that they are also the prettiest chocolate chip cookies I have ever made. I used my medium scoop for these cookies and the centers stayed thick and puffy and they spread just enough to give them a perfect round shape. The original recipe is from the Levain Bakery that was featured on Bobby Flay's show, Throw Down. I made a few modifications (hence the half wheat) so the recipe below is with my modifications. I really think that the whole wheat flour enhanced the flavor, so if you have some give it a try, if not all-purpose is good too. 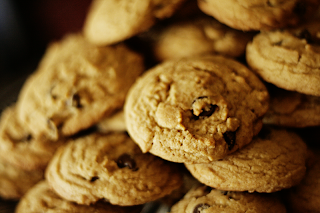 Preheat the oven to 350 degrees.
In a medium bowl combine the flours, salt, baking powder and baking soda. Give it a good stir with a fork.
In a large bowl (or standing mixer bowl) cream the butter and sugars. When they are well combined add the eggs and vanilla. Next slowly add the dry ingredients to the wet ingredients. Be VERY careful not to over mix. Stay on low speed!! Add the chocolate chips (and walnuts if using) to the dough and blend with a wooden spoon.
Using a medium scoop, drop by the scoop full onto a baking sheet approximately 2 inches apart. Bake at 350 for 17-20 minutes (mine were finished at 18 minutes). 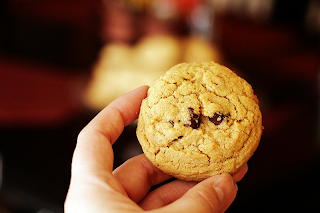 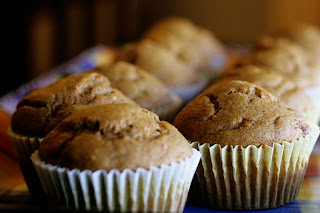 I know it's not the right season for pumpkin things but I don't really care :) I love pumpkin flavored baked goods and pumpkin muffins just sounded good. I pulled this recipe from the King Arthur website and it was good. I think when I make them again I will substitute applesauce for the vegetable oil because after a day or so they were kind of dry. Despite that, they did have a great flavor and the tops were beautifully puffy!

In a large bowl whisk together the pumpkin, eggs, brown sugar, oil, molasses, salt, spices, and milk. Scrape down the sides and bottom of the bowl. Whisk the flour, baking powder, and baking soda together. Add all at once to the wet ingredients and mix until all ingredients are well combined. Drop about 3 tablespoons (or a scant quarter cup) of the batter into the greased leaf molds, or the wells of a prepared muffin pan. Bake for 16-18 minutes, until firm to the touch for leaf molds; 18 to 20 minutes for regular muffins. Yield: 16 to 18 leaf shaped muffins, or 12 regular muffins. 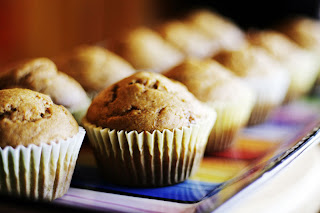 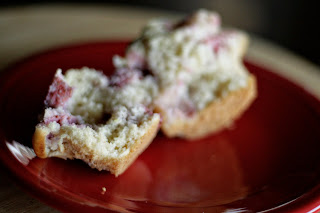 I am continuing on my quest to make muffins every weekend but in the process I have realized that if I am going to make them every weekend and blog about them (my goal)..... I am going to have to broaden my horizons. Anyone that knows me well knows that I have a fear of cooked fruit. I don't eat pies, cobblers, breads, etc with big old chunks of mushy cooked fruit. It makes me gag. Typically the only exception to that rule is blueberries in muffins. I thought about this weekend and I decided that if I could handle a blueberry in a muffin I just might be able to handle something else. About 2 years ago I made strawberry bread that was a huge hit and I actually enjoyed it, so I decided I would try and make strawberry muffins.

The result is pretty good. I am in love with the muffin part. There is a hint of cinnamon and nutmeg that is just fantastic. The fruit chunks....I'm handling. I think next time I will pop the strawberries in the fruit processor first that way I won't have to bite into a chunk of them. But all in all this was a great recipe, one that I would make again. I forgot to add the cinnamon sugar topping this time but I think it would make a great addition. 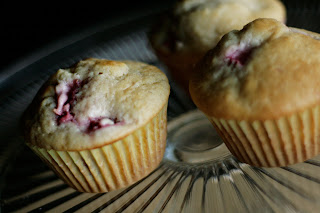 cinnamon sugar, for sprinkling on top

In a separate large bowl, use your fingers to rub together the lemon zest and sugar until the sugar is moistened and fragrant. Add the eggs, buttermilk and vanilla and whisk together until blended. Add the melted butter and whisk until thoroughly combined.

Add the dry ingredients to the wet ingredients and fold together with a rubber spatula. Add the diced strawberries and fold in, just until distributed.

Spoon the muffin batter into the muffin cups. Sprinkle cinnamon sugar on top of each, then bake for 15-18 minutes, until the tops are golden brown and spring back when lightly pressed with your finger.

Also I have to sneak this picture in here because my cat is so cute. She can't stand not knowing what is going on and she just hopped right up in the window sill while I was taking pictures :) 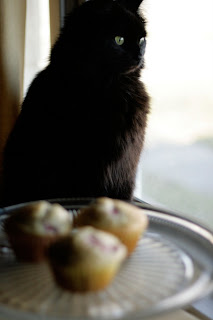