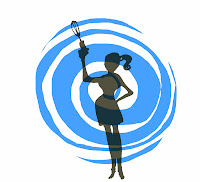 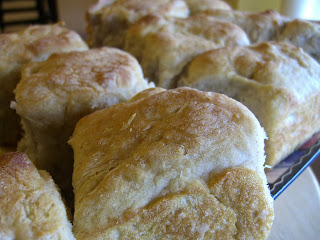 I am very excited to announce that this month I completed my first Daring Baker challenge!! I have been watching others blog about their DB experiences for months and I finally decided to step up to the plate and give it a whirl. In case you are wondering the Daring Bakers are a group of baking bloggers that complete a challenge once a month. Every month some one new chooses a recipe and everyone follows the exact same recipe and then on the same day they post about their experience. The whole idea behind the group is that you step out of your comfort zone and really push your skills to the limits, hence the name DARING Bakers. Of course my first month would require yeast (doh!). I have a little bit of yeast experience, but not much. Plus most of the experience that I have is with a bread machine. One of the rules of this challenge was that we had to knead by hand, so no bread machine. This months challenge was Tender Potato Bread and the event was hosted by Tanna. Thanks to Tanna for hosting this event and coming up with a great challenging recipe.

Everyone kept commenting on how sticky the dough was, but, I couldn't believe it when I finally started the kneading process. I used at least an extra cup (probably more like a cup and a half) while kneading. The dough stuck to my hands, my counter top, my bowl, the scraper I was using to scrape the dough off of the counter, it was quite comical. It took about 10 minutes to knead. Then I left it rise. I was a little nervous at first because in the first hour it did not rise at all. I decided to stop peeking and not check it again until the full 2 hours had passed. To my delight it had doubled in size when I checked again.

The next part really had me laughing. Instead of falling out in a large ball when I tried to dump the dough out of the bowl, it came out like the insides of a pumpkin. Ooey, gooey, sticky and stringy. More kneading and more flour and I finally felt like I was ready to form the dough into the rolls I had been dreaming of all day. This was not as successful as I had hoped it would be. I would form the ball then set it in the pan and one minute later it would start to spread out like a big thick pancake. I some how managed to fit 12 dough "balls" into my 9x13 pan. Now if and when I make this recipe again I will skip the second rise. For one, they already filled the pan with out rising. And two, they almost tripled in size! They were sticking out of the top of the pan a full 2 inches.

Following the advice of several other Daring Bakers I baked the rolls at 425 for the first 10 minutes then dropped down to 375 for the last 20 minutes. The end result was more of a bun than a dinner roll, but they were still pretty tasty. I served them for a late Thanksgiving that we had with friends on Saturday night. They all seemed to enjoy the rolls and actually took the left over ones to make breakfast sandwiches the next day.

All in all I am very pleased with my first challenge. I hope to have a prettier picture next month (these rolls were not very photogenic). But until then, happy baking! 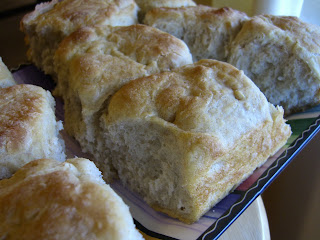 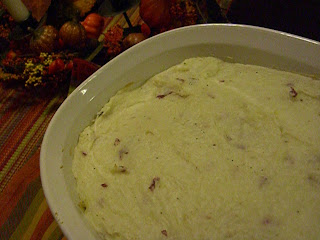 Tonights dinner was kind of a cross between Shepard's pie, pot pie and thanksgiving dinner. I was inspired earlier today by the Shepard's pie in Elly's blog. But I don't like to use peas as an ingredient and I didn't have any corn. So I decided to make it more pot pie like with a Thanksgiving like feeling. It turned out really great. We both had seconds and I almost went back for thirds.

Melt the butter in a large skillet, then add the carrots, celery and onion.
Cook until the vegetables are tender.
Season the vegetables with salt, pepper and poultry seasoning.
Add the ground turkey and cook through.
Dissolve the corn starch in the chicken broth.
Add the chicken broth slurry to the cooked ground turkey and let simmer until the broth begins to thicken.
Put the turkey mixture in the bottom of a casserole dish.
Top the mixture with 2 cups of mashed potatoes and smooth the potatoes out using a spoon to create small peaks.
Bake at 350 for 15 minutes. Then broil on high for 2 or 3 minutes until the peaks turn golden brown.
Posted by Jessica at 7:23 PM 3 comments: 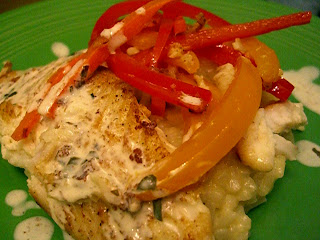 After having only 2 posts for the entire month of October, I had to redeem myself. I needed to make something that was really really good. Luck would have it that yesterday the Allrecipes recipe of the day actually looked really good to me. It has also been a long time since Jesse and I have had fish, so it was perfect. Unfortunately, when I went to the store they only had frozen halibut and that wouldn't work. The gentleman behind the counter was very helpful and told me that Tilapia is also a great mild flaky fish and would make a good substitute. And it turned out fantastic. For the side dish I made risotto, but I made it very very plain because usually Jesse isn't a huge fan of risotto, so I wanted it to be more rice like with a touch of creaminess. I also served this with julienned carrots, orange bell pepper and red bell pepper.

On to the recipes.

1. Rinse the halibut steaks and pat dry. Season with salt and pepper, then dust with flour.
2. Melt the butter in a large skillet over medium-high heat. Fry the halibut steaks in the butter for 4 to 5 minutes, until nicely browned. Remove from the skillet and keep warm.
3. Reduce the heat to medium, and stir the wine into the pan, scraping up any browned bits stuck to the bottom. Mix in the lemon juice, then stir in the cream. Simmer for 2 to 3 minutes or until it starts to thicken. Season with parsley, basil and capers, and stir for another minute. Serve halibut with sauce spooned over it. Garnish with additional parsley if desired.

My changes and tips :
Obviously I used tilapia instead of halibut, it was a nice substitute.
I also cut the basil and parsley in half.
I forgot to use capers (whoops!)
When I flipped the fish over to cook on the other side I added the julienned vegetables to pan and let them cook.
I only used about 1/2 of the juice from my lemon and it was still very powerful.

Melt butter in a large skillet
Add the arborio rice and let it soak up the butter. Next add the white wine, let simmer until it is cooked out.
Add the HOT vegetable broth 1/2 cup at a time, stirring constantly and waiting until the broth is almost completely absorbed before adding more.
When adding the final 1/2 cup of vegetable broth season with salt and pepper.

NOTE: We served with just a touch of the sauce from the tilapia, since there was soooo much extra!
Posted by Jessica at 8:14 AM 3 comments: